Fire Under the Sea

The back jacket of the paperback edition reads:
“Named by Booklist and Library Journal as one of the top science books of the year, Fire Under the Sea examines one of the most exciting scientific revolutions of our time.Totally unknown before 1977, seafloor hot springs occur in numerous places along the globe-encircling chain of underwater mountains known as the midocean ridge. Fire Under the Sea not only recounts the drama of the discovery but also examines the fascinating theories developed about the relationship between the inner heat of the earth and the ocean that swirls above it, the formation of gold, and even the origin of life itself.”

The San Francisco Chronicle called the book “a high-velocity intellectual adventure,” but I can attest that while the process of writing it was an adventure, it was hardly high-velocity. I pieced the book together over several years of night and weekend writing, while simultaneously teaching myself what I needed to know about such fields as chemical oceanography, geophysics, microbiology, and the biology of worms, and totally new fields like chaos theory and the origin of life. It was a good deal of fun, and I was gratified by the positive reception the book gained.
--

Published in 1990: William Morrow (hardbound), Quill (paper), 1996. I have a number of original hardbound copies that sold new in 1990 for $25. I will sell them for $5 on Amazon.com until they're gone. Used copies of hard or paper may also be there. 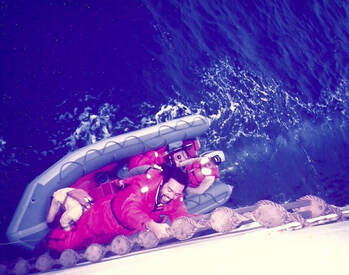 To write about ocean exploration you need to be there, so here I was in 1988 climbing up the ladder for an "at-sea transfer" from the Zodiac 25 feet below to the deck of the  NOAA research vessel, Discoverer, where the scientific exploration was conducted.