A Common Fate, like Fire Under the Sea, is written in a style that's often called a "nonfiction novel," or "literary journalism." A characteristic of the style is that real people are characters in the book, and showing their internal life–their motivations, thoughts, dreams, ambitions–reveals their depth, in a way that more conventional journalistic reporting can not.
I had been aware of the emerging crisis over endangered salmon for more than a decade, largely because of my position with Oregon Sea Grant at Oregon State University. So I was very pleased that A Common Fate was the first book to focus on the endangered salmon problem in the 1990s. I always thought that “saving” salmon in the Northwest was a test case for endangered species throughout the world, which is certainly a major issue for the twenty-first century. If it couldn't be done here, the chances for saving most endangered species must probably be reckoned as grim. I wanted to explore the issues with the book.
-- 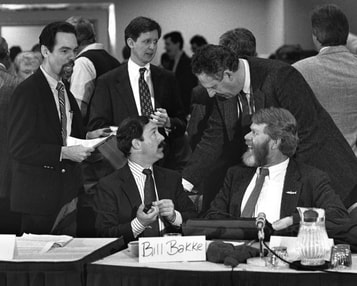 In 1990, a "Salmon Summit" brought the range of interests affected by the salmon decline together to try to craft a cogent regional response. I reported on it (far left, standing) for public radio and then for this book.
link to amazon page